skip to main | skip to sidebar

Two members of Placid Quake, Darin and Barry, were reunited briefly Friday evening in a Chicago suburb. The show was not reminiscent of days of yore for the Quaking rockers. In fact, these two aging musicians are more likely to prefer Quaker oatmeal and rocking chairs.

Still, the show was family appropriate, and appreciated by all those in attendance for the sold-out show.
Posted by Barry @ Placid Quake at 2:45 PM

Finally figured out how to upload to YouTube - Check out this video:

http://www.youtube.com/watch?v=NdsMjEnPxOo
Posted by Barry @ Placid Quake at 10:22 AM

Check out the new blog: www.we-buylocal.blogspot.com The latest iteration of musical creation...a crazed gyration of the Rock generation, when I need to avoid the nauseation and frustration, all without beverage lubrication...

It's kinda like this. Take a music teacher and virtuoso guitarist, move him to bass, add history (drums), math (vocals), facilities (guitar) and the Dean of Faculty (rhythm G and keys), and you have Cause for Expulsion, an easy driving rock-star-wanna-be collection of younger-than-we-look musicians who make easy songs look hard, and sound even harder.

Anyway, it was a lot of fun, on a day when the sun and the rain had an ongoing battle. 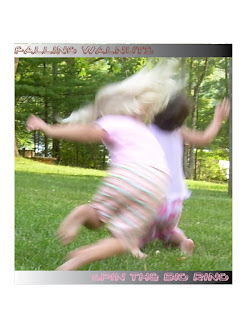 How many great rock bands are made up of members of previous other bands? How many ancestors to great bands are there? I can think all day on this. Goes back to before Jimmy Page played with the Yardbirds, and will continue past when Chris Cornell sings and Slash plays for AudioSlave.

The Falling Walnuts are made up of Barry Schnoor, originally from Placid Quake, and Jeff Claman, of Washington Underground Singlespeed Society.

The live performances have been well documented in both video and audio form, invoking the memories of girls, bic lighters in hand, swaying out-of-beat to the music performed by these two.

The photo here is of their latest EP, "Spin the Big Ring." 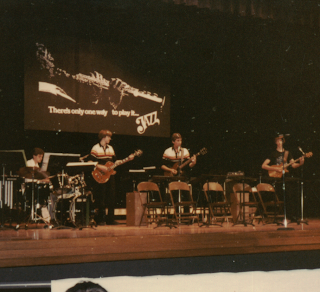 Here, for a brief Placid Quake reunion, are Darin, Barry, Brian and Paul performing "You're the One" and "Open the Door," two originals penned by Brian and Paul.

The quartet rocked the auditorium that night!
Posted by Barry @ Placid Quake at 9:17 AM 1 comment: 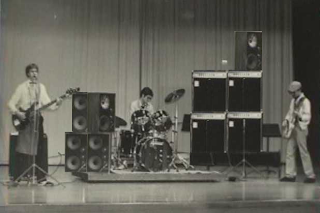 The first original song performed by Placid Quake was Cry and Cry
This was written in Snag's Sophomore English Class.

Here's a photo of Barry, Darin and Brian performing Should I Stay? at Calvin C. Ooten Auditorium during a sold-out Jazz Show, 1983.
Posted by Barry @ Placid Quake at 9:01 AM No comments: 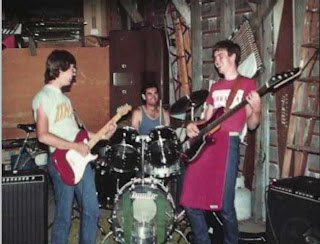 Shortly after Placid Quake lost their fortune to a crooked tour manager (and their tour bus off a ferry to Sicily), my therapist suggested I keep The Quake alive by writing the band name everywhere I could. So here's a list of some of the places:

Study carrels in Love Library in Lincoln Nebraska.
On the side of a Crouse Cartage truck (I didn't do this one)
On the side of a Georgia Pacific owned grain hopper car (didn't do this one either)
Inside a 20,000 gallon fuel tank onboard the USS America, rest her soul, which is now lying below 6,000 feet of Atlantic brine.
Inside a London Tube station.
Under a desk in several New York hotel rooms.
Under a desk in a London hotel room.
Under desks at the University of Virginia, Ga Tech's library, a San Francisco hotel room, an Ann Arbor hotel room, a Maine campground, under a vinyl floor at the University of Virginia hospital, in the rafters of a new MRI building at UVA, in the rafters of a Math and Science research center in Millbrook, NY, under a desk at Syracuse, in the missile magazine onboard the ex-USS Dahlgren, In a Miami hotel room, on about half the 2x4's sold at Berry Lumber from 1984-1986...

Where have you written "Placid Quake?"

Inquiring minds want to know.
Posted by Barry @ Placid Quake at 11:11 AM 2 comments: I was chatting with Brian from Placid Quake. And he reminded me that the cyber site where Placid Quake used to reside has been taken down as part of a sting on anti-trust issues, copyright infringment stemming from the Tremor Boys' use of tight parachute pants during their 1986 Euro Tour, and innuendos of child photography...whatever that means.

So, I'm resurrecting the electronic narcissism we call blogging, out of deference to the band that was once Western Iowa's premier Rock and Roll foursome.

So join me in a shout out to boys who brought so many things to our lives: Hearing loss being just one of them.

Barry @ Placid Quake
Husband to a force of nature, Father of 2...that's my proudest achievement.